NOTES: Based on the novel by Edna Ferber. • RKO spent $1.5 million dollars in the midst of the Great Depression. • The sets built in Encino, CA for old Osage were left up and used by RKO for many other Western films.

PROS: Iconic opening scene of a land rush with thousands of extras riding horses, wagons, carts, penny-farthing’s, etc. There are also some funny visual gags in this scene. • The set design of Osage, especially as shown in the boomtown days is lush and busy with every inch of the frame filled with detail. It feels much more authentic compared to the typical lazy empty streets you see in many westerns of the period. • A pretty exciting gun fight. • Neat to see the progression of Osage; from lean-up’s to skyscrapers within the span of two hours(this was the big appeal for audiences in 1931). • The posters for this movie all kick ass!

CONS: Yancey Cravat(Richard Dix) is intolerable. He’s perfect at everything and I am not sure if he was intended to be viewed as a suffering saint, but he comes off as condescending and just plain annoying!! • Episodic to a fault. • A lot of casual racism. Some may say this is just due to the time in which it is made, but when you compare this film with even something like Trader Horn(also nominated this year) it’s approach to black characters looks downright absurd. The first time we see the young servant Isaiah(Eugene Jackson) he’s hanging from a chandalier fanning the family who are sitting at the dinner table! • Irene Dunne’s old makeup at the end of the movie actually makes her appear younger! • The sound is atrocious. I actually had to turn the subtitles on. • Maybe the film is supposed to be viewed as satire and we are just missing the point. Critics loved it at the time which I can only assume was because of the epic decade spanning story.

BETTER REVIEW THAN MINE: from Danny over at Pre-Code 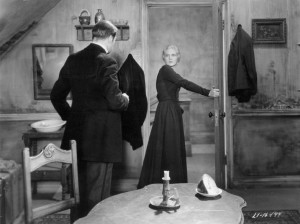 NOTES: Based on the classic novel by Ellen Wood. • The only complete print of this film(with a running time of 102 minutes) resides at UCLA’s Instructional Media Lab located on campus in the Powell Library building. Apparently you can set up an appointment to view it.

*The version I am reviewing was missing the last 12 minutes.

PROS: Ann Harding gives a steady, controlled performance. There are moments with her child where she appears to be improvising(a moment with a donkey standing on her dress comes to mind) and she comes off as totally believable and candid as if we are suddenly viewing  home movies. • Really all the performances are strong. • Nice set design within the mansion & some quaint exterior shots filmed on location. • A couple sudden moments that I am sure were quite shocking to the audience of that time.

CONS: An overly tragic plot that would become the type of thing now seen on TV Soap Operas. • Some goofy music at times. • Despite a strong “stand up for herself” moment, Harding’s character almost immediately reverts back to the “I’ll do anything you want me to” woman, which is a common reversal seen in movies of that era.

BETTER REVIEW THAN MINE: contemporary review from Mordaunt Hall over at NYTimes 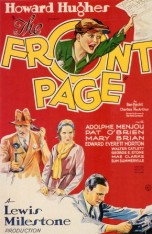 NOTES: Based on a 1928 smash hit Broadway play of the same name which was written by two former reporters. • Remade into the more well known and critically acclaimed film from 1940, called His Girl Friday. • Developed into a short running TV series for CBS and remade again in 1974 by Billy Wilder to serve as a Walter Matthau/Jack Lemmon vehicle.

PROS: Creative opening credits. • Great rapid-fire, edgy dialogue which has since become synonymous with movies of the 1930’s & 40’s. Many cite His Girl Friday(1940) as the best film iteration of the play, but they shouldn’t overlook this first attempt. There’s a layer of grit over this whole film that you won’t find in the later versions • Speaking of grit & edge, it’s borderline nihilistic at times! The way the guys treat the prostitute Molly Malloy(Mae Clark), lot’s of almost-swearing(the movie ends on a well placed curse), and even the bird getting flipped highlight the fact that this was made pre Hays code. • Fantastic camera movement. 98.7% of the film takes place in the Press Room of the Criminal Courts Building and yet you never feel bored of it because of the creative use of the camera. There are scenes with multiple characters sitting around a table as the camera tracks around them in a continuous circle. Actors lean in and out of frame timed to the camera moves. It reminded me a bit of the opening scene of Reservoir Dogs(1992). Quentin Tarantino has cited His Girl Friday as one of his favorite films but I wonder if he’s seen this one?(He probably has) • Inventive camera angles. Speaking of Tarantino, this film might be the origin of the “trunk-shot“… although in this case it’s the “roll-top desk-shot”. • The plot really keeps you on your toes. • Adolphe Menjou as the editor Mr. Burns is great. He was nominated for Best Actor that year.

CONS: Loses a little bit of steam in the second half. • The sound is pretty muddled, which makes it difficult to hear, especially since so many people are talking at the same time. Hopefully this was remedied in the restored Kino Classics blu-ray edition that came out recently. • Pat O’Brien’s voice starts to grate on ya after a while…  but maybe it’s just me.

BETTER REVIEW THAN MINE: from Danny over at Pre-Code 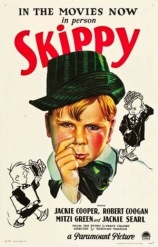 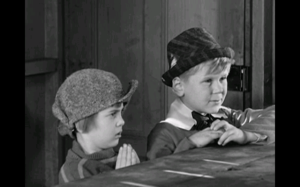 NOTES: Based on the highly popular comic strip of the same name by Percy Crosby(which was an influence on Charles Schulz, creator of Peanuts). • Crosby allegedly didn’t care for this film. • Jackie Cooper(age 9 at the time) remains the youngest person ever nominated for Best Actor. • For Skippy, Cooper was on loan from Hal Roach studios. He was under contract making Our Gang shorts(what would later become The Little Rascals) • The story behind a crucial crying scene is one of Hollywood legend. • Despite his arguably sadistic techniques, Taurog won Best Director that year.

PROS: Jackie Cooper’s performance. He has the confidence, control and ability to emote(even despite cruel trickery from the director) that many adult actors would wish for. • Robert Coogan as Sooky. The fact that he struggles with most of his lines(so much so that he falls down at one point!) and yet Taurog allows for it, is really where the charm of this film emanates from. Letting kids be kids adds to the realism too. • Despite it’s light-heartedness there is some social commentary below the surface. • The set design of “Shanty Town” is gritty and feels lived-in. • A hard dose of reality in the middle of the film that is surprisingly moving almost 90 years later.

CONS: Despite great lines like “ahh yer full of prunes” and “I’ll paste ya one!”, the dialogue is a bit on the artificial side and could be a annoying for the less patient viewer or someone unacquainted with the dialogue of the 1930’s.

BETTER REVIEW THAN MINE: from Russell over at screensnapshots

NOTES: The first film(non-documentary) shot on location in Africa(although a few scenes were shot on set). • Based on the book by the real life Alfred Aloysius “Trader” Horn. • Edwina Booth would end up suing MGM because she contracted malaria while shooting. The lawsuit basically put her on the outs with the studios and she would only make a few more films before retiring.

PROS: Shot on location which it gives it an air of authenticity rare for the time. • Fast paced cutting in the first half of the film really propels the story along. • The use of actual natives as opposed to white guys with painted faces. • Gritty; i.e. nudity, blood, dead bodies, animal attacks, actual hunting kills(or so it seemed), torture, etc. • Some occasionally impressive use of rear projection and matte paintings. • Harry Carey Sr. plays the grizzled hunter role convincingly.

CONS: The movie as a whole is a bit boring. (I am sure that all the African footage was more of a spectacle in 1931 though) • An overlong “name that animal” segment smack dab in the middle of the film. Every African animal you can think of seemingly just happen to all be within the same acre of land that Horn(Carey Sr.) & Peru(Duncan Renaldo)stroll through. Horn provides the name for each one they see. Just when you think they couldn’t possibly see another animal, Horn points and says “and there’s a [name’s animal] .” He also provides little tidbits for each animal and corrects Peru on common misconceptions. The whole thing borders on comical as it just keeps going on and on. Even Peru remarks on the luck of having all the animals in such close proximity of each other! • Despite some good rear projection, there is also some pretty shoddy instances of it. • An overuse of speeding up the film for pacing and energy. Sped up film never looks good and I can’t believe anyone thought it ever did!

BETTER REVIEW THAN MINE: from El Santo over at 1000misspenthours

Did the Oscars get it right?

Cimarron is just not very good. At the time it was seen by some as the best picture ever made!! But in this humble viewer’s opinion, The Front Page is the clear winner of this lot. It’s funny, it’s slick, it’s gritty, it’s good!

Here are some favorably reviewed films which were eligible that year but weren’t nominated for Best Picture. I compiled the list from various sources and I’ll leave it up to you to decide if they were snubbed or not. Have one to add? Let me know and I’ll list it. The ones I’ve seen are marked with an asterisk:

This entry was posted in 1930's, Best Pictures. Bookmark the permalink.